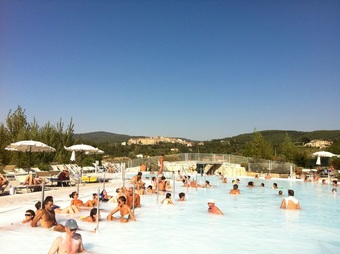 SPAS
Tuscany has many thermal baths and spas, which provide many forms of treatment. They are extremely relaxing places with the waters said to contain therapeutic characteristics.

Many of the spas or "terme" are old-fashioned in appearance and are set in delightful gardens.

San Giovanni Terme in Rapolano is located in the Tuscan countryside with spectacular views. The white "mud" is reported to be good for the skin.

The most unusual attraction being the grotta, starting from the entrance through to the deepest part of the grotta, three different zones are crossed, each one increasing in heat, which tradition has named Paradise, Purgatory and Hell.

The steam of the rich thermal waters generates a natural "bath of health" which leaves an overall sense of well-being.

So much to do and see in Florence and the surrounding area.....